On May 20, 2011, Posted by Perttu Salovaara , In Leadership,well-being, By being,ghosbuster,happy,himself,hurry,selftalk,strange,stress,talking,to,well,well being , With No Comments 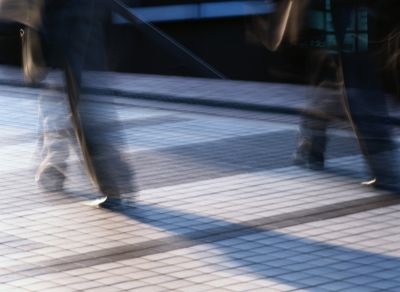 There was this neatly dressed business man, looking very normal and formal, walking in the middle of Helsinki – and he was talking alone.

It sure looked strange, kind of contadictionary: sharply dressed lunatic. It took me quite a while to realize that he was carrying one of these things I had only vaguely heard about, a hands-free. Well, that was late 1990’s…

Now, crossing the city today (May 2011) I saw three people walking on the street and talking alone. And I can assure that none of them was talking on the phone or wearing a hands-free.

The first man, around 40, dressed casually, was walking and moving his lips slightly, but clearly, and smiling and grinning every once in a while. A happy man…

And only 30 seconds later I observed the second person talking alone: he communicating loud and clear, and he emphasized his words with vivid body language, like a lively speaker. Well, this guy looked a bit shagged, so I figured he’s a bit nuts anyway.

The third guy was a tourist, with a map in his hand. He seemed a bit lost and talked aloud alone, like if he was wondering where he is, and speaking out that confusion.

Why did I observe now, in such a short time span, so many examples of this behaviour? Has it increased lately? Why do people talk alone? Do you do that?

I confess, I do it sometimes at home or when I’m stressed. But these guys – is it epidemic? A side-effect of the swine-flu?

But to be frank, I think there’s something in the air, and it is epidemic. Maybe that’s the reason why we established a Well-Being Team early this year. The way the team got created reminds me of Ghostbusters: we still don’t know what it is, but we’re ready!

If there’s something strange inyour neighborhood

Who ya gonna call?